You are here: Home / By Author / C. S. Lewis / Turkish Delight | The Chronicles of Narnia; The Lion, The Witch and The Wardrobe
Jump to Recipe·Print Recipe

‘It is dull, Son of Adam, to drink without eating,’’ said the Queen presently. ‘‘What would you like best to eat?’’

The Queen let another drop fall from her bottle on to the snow, and instantly there appeared a round box, tied with green silk ribbon, which, when opened, turned out to contain several pounds of the best Turkish Delight. Each piece was sweet and light to the very centre and Edmund had never tasted anything more delicious. He was quite warm now, and very comfortable.

-The Lion, The Witch and The Wardrobe, C.S. Lewis 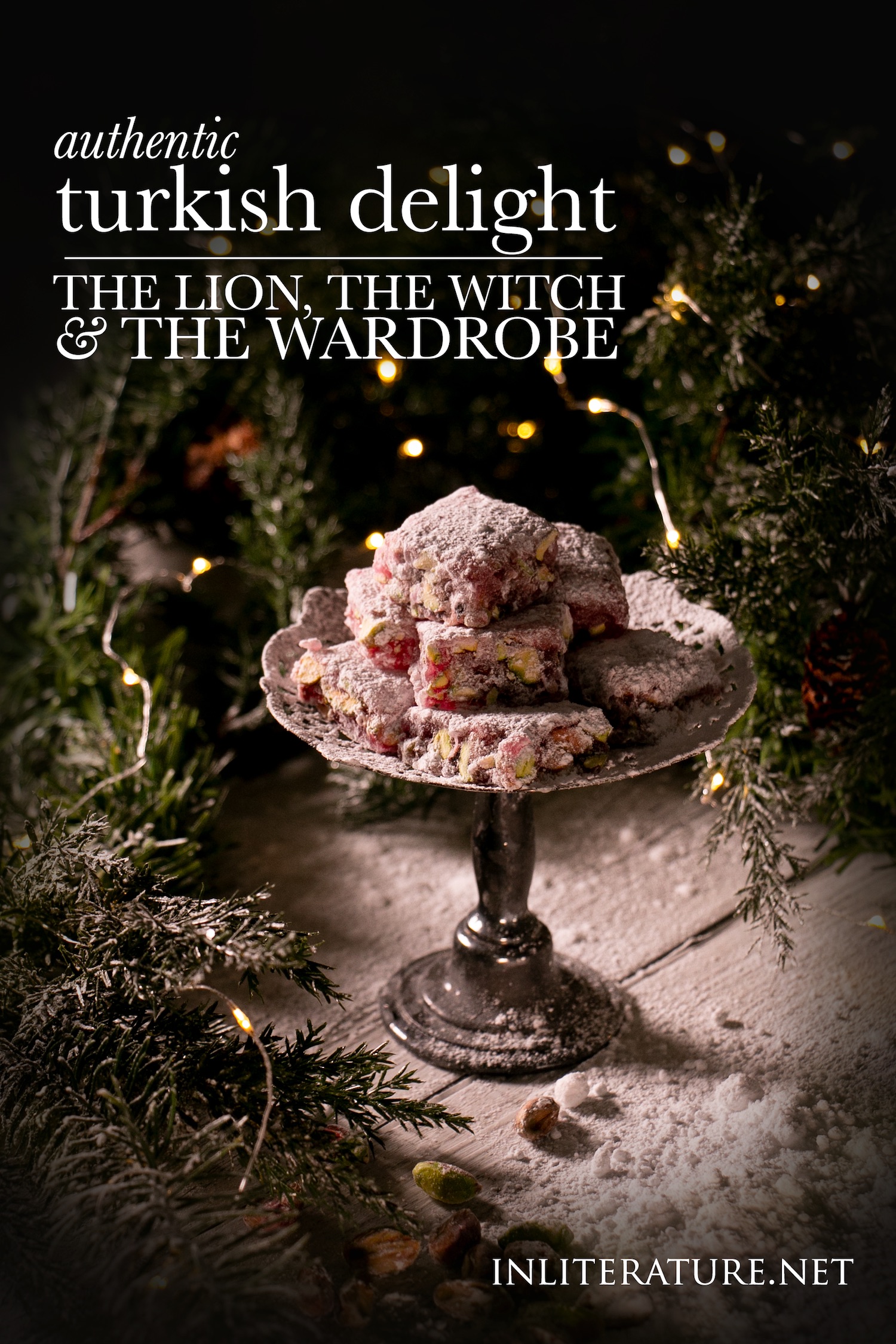 After reading The Lion, The Witch and The Wardrobe, many of us grew up dreaming of having a round box of our own, filled with delicious Turkish Delight. Of course, we didn’t know what it tasted like, but if Edmund craved for more, it must’ve been good!

But, when we finally received a box of store-bought Turkish Delight for the first time, we found ourselves with a mouthful rubbery candy tasting of rose. Oh, the disappointment! And we went away thinking how horribly cruel of our favourite story to raise our hopes.

It was only the other year as I stopped through Dubai, that I picked up a box of Turkish Delight from the airport because of the beautiful box it was supplied in. One little nibble turned into a devoured box, and I realised we’ve all been eating the wrong sweet. True Turkish Delight, known as lokum, is made with only sugar, cornflour, cream of tartar, and water as the base recipe. Turns out, the commercial versions we’ve been eating are made with glucose syrup or gelatine. And they couldn’t taste more different.

Engine Akin states in his book, Essential Turkish Cuisine, that the perfect lokum ‘can only be produced expertly only after long years of apprenticeship, should be soft enough to chew effortlessly yet should not stick to the teeth’.

While the whole ‘apprenticeship’ made me doubt whether making true lokum was possible, a recipe by Felicity Cloake from the Guardian made it happen. And fortunately for us, she worked her way through numerous Turkish Delight recipes and came up with one that will give you the true soft Turkish Delight experience Edmund had. I’ve adapted Felicity’s recipe and added notes below, but her article on Turkish Delight is worth a read as she walks you through the variations in recipes and ingredients.

Turkish Delight | The Chronicles of Narnia; The Lion, The Witch and The Wardrobe

*Instead of butter you can use an oil, but make sure it has a pleasant or minimal flavour.
*Prep your ingredients before you start.
*Continuously stir. It’s not as difficult as it sounds– the time goes quickly!

Bubble and Squeak | The Wind in the Willows