**Looking for the Chocolate Frog packaging? Hop further down to download** 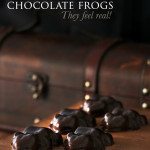