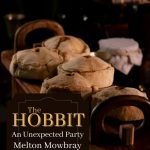 tips for serving pork pies for your hobbit party

Made as individual servings, pork pies are perfect finger food for your Hobbit party. And, as Bombur requests, delicious served with a salad on the side.

The shape: a Melton Mowbray pork pie bulges around the middle as they are freestanding when baked, with no pie pans or hoops used to keep the shape.

The meat
Colour: While some pork pies use cured meat to keep a pinkish hue, fresh pork is used in Melton Mowbray pork pies, naturally turning the meat grey after cooking.
Cut: Some recipes call for pork shoulder, others pork belly. Either way, these two cuts of pork are used due to their fat percentage. The perfect proportion for pork pie is one-third fat to two-thirds lean meat. The pork should be chopped, not minced or ground.
Seasoning: Anchovy essence is the special secret ingredient of a Melton Mowbray pie seasoning. The only other seasoning you need is salt and pepper.

The jelly: A jelly made of pork bone stock is used to fill all the air gaps. This does three things:
a) it reduces the amount of oxygen with access to the filling, keeping the pie from spoiling as quickly,
b) it keeps the pie moist and
c) it keeps the crust from crumbling and, therefore, the pie from falling apart.

The pastry: The pie crust is made using a hot water crust pastry, and formed using a pork pie dolly, a wooden pie crust shaper used when making traditional hand-raised pies. A beer bottle will do in a pinch.

Technically Melton Mowbray pork pies are protected under EU law, so only pork pies made traditionally and near Melton Mowbray (near Leicestershire, UK) can use the name when branding their pies. The same way a Cornish Pasty can only be branded as such if made in Cornwall, and Champagne can only be sold if it comes from Champagne, France.

Melton Mowbray pork pies are as British as they come, so learn how to make these very specific pork pies for your next Hobbit Unexpected Party.

Pulling it all together

Recipe adapted from numerous sources, including:

* If no anchovy essence, use a crushed anchovy. Cans can be found in the canned fish section of the grocery store.

**Trotters are the feet and the hock is the first joint. Both are high in collagen, which when cooked, turns into gelatine, so either can be used. Depending on your butcher or supermarket, one may be easier to source than the other. If you can’t find either, or it makes you squeamish, store-bought gelatine can be added once your pork broth is cooked. However, this is the traditional way.

***The jellied stock can be poured into a glass measuring cup, set aside to cool, then placed in the fridge for the next day. Alternatively, if you are using oven-friendly cookware, place it in the oven at 140oC overnight (9 hours) with the lid on, but slightly ajar to allow the liquid to reduce.

**** You can wrap the dough in the tea towel, then wrap in cling wrap and place in the fridge overnight. When ready to use the next day, bring back up to room temperature.

***** If pie crust breaks or crumbles, it’s too cold or too dry. Allow dough to warm first, which can be done by kneading with warm hands. If still crumbling, add a tsp of warm water and knead in. If it’s too soft and not holding form, it’s too warm. Wrap and chill for a few minutes in the fridge before trying again.