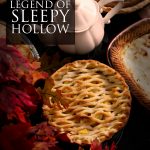 “Fain would I pause to dwell upon the world of charms that burst upon the enraptured gaze of my hero, as he entered the state parlor of Van Tassel’s mansion. Not those of the bevy of buxom lasses, with their luxurious display of red and white; but the ample charms of a genuine Dutch country tea-table, in the sumptuous time of autumn. “

What is apple pie?

Apple pie is a baked dish with a layer of pastry on the bottom, filled with sliced apples, spices and sugar, and enclosed with another layer of pastry.

What type of apples should i use in apple pie?

The Rhode Island Greening would have been a likely option for an apple pie in The Legend of Sleepy Hollow. However, for those around the world today, the Granny Smith apple will stand in nicely.

What type of apples did Colonial America have?

The apple played an important role in the New World, with numerous orchards planted across the east coast of the US. The first orchards planted in Massachusetts were in 1625, grown from seeds brought over from England. Apple varieties common during Washington Irving’s day would’ve been the:

What is the history of apple pie?

The all-American apple pie can be traced way back to the 1300s in England.

Fortunately, in the 1700s they were using sugar and edible crusts, a big jump from the 1300’s when the crusts were merely dishes, and sugar was too expensive to use. The recipe Ichabod would have tasted would have been similar to the ones we eat today.

How to make apple pie

This makes enough for the three pies to be served for a Sleepy Hollow feast, including a topping for the apple pie.

Makes 4 pie shells, or 2 pie shells and their top crusts