We dined heartily on a soup something like gazpacho, and then on veal cutlets, in the first-floor restaurant of one of the town’s nineteenth-century hotels.

Raw garlic and onion blended with fresh vegetables, bread and spices, show off their punchiness in this chilled soup.
In The Historian, Paul and his daughter travel to Les Pyrénées-Orientales, located in southern France on the border of Spain. In a spa town, that blends both French and Spanish culture and language, they dine on gazpacho and veal cutlets.

It’s fitting that this dish is served to them in another country other than Spain. While gazpacho is identified as a Spanish dish, this recipe is a nomad, adapting and upgrading local flavours as it has travelled through centuries and regions. The popular version of gazpacho that we know today picked up the Spanish ingredients of tomatoes and green pepper/capsicum in the 1800s and has been traced as far as Andalusia, Spain’s southernmost province. However, its evolution from a ‘bread soup’ predominantly made of bread, olive oil, garlic, onion and spices is suggested to date far earlier and from other cultures.
For those interested in a discussion on the origins of the word, and its potential history: https://forum.wordreference.com/threads/spanish-etymology-of-gazpacho.350302/

Because of the recipe’s travels, this recipe has spun off to include a number of variations, so feel free to adapt, whether it’s switching out the cumin for paprika or cayenne, or adding in seafood or meat.

The recipe needs one-hour minimum to infuse the flavours as they chill, however, this dish can be made earlier in the day, ready for lunch or dinner.

This dish does well as either as a main meal for two for a filling yet light lunch or as an entree for 3-4 people as a multi-course dinner. 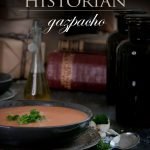 
1/3 onion, sliced fine with a mandolin


1/3 cucumber, half the skin peeled, chopped

Finely mince garlic, then add in olive oil, cumin, salt, pepper, and blend together.
Add in bread, tomato, onion, capsicum and cucumber.
Cover and let sit in the fridge for 1 hour.
Puree then stir in vinegar and water. 1/2 cup of water will give a thicker gazpacho, 1 cup a thinner consistency.
Serve.

As gazpacho was adapted as it moved into different regions, there are many variations of this recipe.
*Cumin can be replaced with cayenne or paprika.
**Bread can be lightly toasted if fresh.