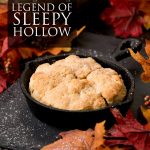 “Such heaped up platters of cakes of various and almost indescribable kinds, known only to experienced Dutch housewives! There was the doughty doughnut, the tender oly koek, and the crisp and crumbling cruller; sweet cakes and short cakes, ginger cakes and honey cakes, and the whole family of cakes.”

What are short cakes?

Older cookbooks suggest that short cakes were a scone-like cake, limited in sweetness, that allowed for a slathering of cream, as was served at the Van Tassel feast.

As an old recipe, the term short cakes now has numerous meanings. A more modern recipe suggested that shortcake were like the shortbread cookies we look forward to at Christmas time.  The difference was that they were baked in a pan first, then sliced. Other searches suggest shortcakes are like boterkoek, more cakey, heavy and rich. However, I came across a recipe in The Frugal American Housewives cookbook from 1829 that I ultimately decided to follow.

Based on the original recipe, the shortcake should be baked in a ‘spider’ over the fire or hot coals.

A ‘spider’ was a cast iron or sheet metal pan with long legs to stand over the flames, with potentially a long handle.

Remember that in the 1700s to early 1800s when The Legend of Sleepy Hollow was both based and written, the kitchen included an open hearth for cooking. As our kitchens have evolved since the 1800s, an oiled cast iron pan is a good alternative. It was unclear from the original recipe how big the cast iron pan would’ve been, so it’s possible the shortcakes were thinner in size than what has been created here.

How to make Short Cakes