“Hungry, are you?”
“Starving,” said Harry, taking a large bite out of a pumpkin pastry.

A pastie (also written pasty) is an English term, pronounced “pah-stee”, and has a long history dating back to the 13th century. Its name indicates the shape the pastry is cooked in, described as circular pastry, folded into a quarter moon with blunted horns and crimped edges.

The best known pasty is the Cornish pasty, which initially contained meat, turnips and onion. However, pasties, in general, have had a variety of fillings over the centuries, from savoury to sweet.

In the 19th century, it became the standard lunch of tin miners and wasn’t uncommon to put savoury on one end, and a sweet filling, like apple, at the other, allowing both the main meal and dessert to be held in one pasty.

Today the generic pasty can have any filling and is also found as smaller sized pasties for a daintier eating experience.

When I originally made these, I cut the pastry into pumpkin shapes as sweet little desserts. Technically, this no longer is a pasty, since it’s not in the D/ quarter moon shape, however, at the end of the day, this is your party, so it’s up to you how you serve these up! The cuteness of the pumpkin shapes makes them a wonderful party treat. 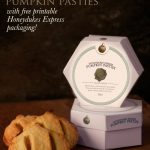 Recipe is adapted from the unofficial Harry Potter cookbook

Looking for more recipes for your Harry Potter party?