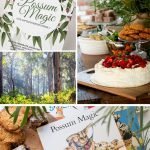 Capture the magic of Australia with a Possum Magic-inspired party! In her bid to keep Hush safe, Grandma Poss made Hush invisible. But soon Hush wants to be seen again, so they both go on an adventure trying magic food, in the form of ‘classic’ Australian food, in each city around Australia.

Set the tone for your Australian party with the invitation. I’ve created a free Possum Magic invitation template for you, using the free Eucalyptus Vectors by Vecteezy.
In the photo, you’ll see I’ve created an example for a 1st birthday by writing text ‘Our little possum turns 1!’ followed by the party details.

However, you might be wanting to use this invitation for an Australia Day party, so I’ve made the design ‘blank’, allowing you to put your own text around the ‘Possum Magic’ design. Wanting to make a printable menu for the table? I’ve pulled together a menu based on the invitation as well. Use Canva or Microsoft Word to drop your file in, then lay text boxes over to add your own party information.

As Grandma Poss and Hush make their way around Australia, they’re on the lookout for ‘magical food’. Through their journey, they try a sample of some traditional Australia foods that create the baseline for your Possum Magic menu.

Wanting to make all the recipes from Possum Magic? Fortunately, many of the recipes are easy to make in advance, freeing you up on the day of the party for finishing touches.

Two days before the party:

One day before the party:

Day of the party:

The native Australian bush is a beautiful source of inspiration, using rustic materials like wood and burlap, and preferably a table centrepiece of Australian native plants like eucalyptus, banksia, or kangaroo paw.

Ready to get started? Grab all your party planner needs with the booklet and downloads below.