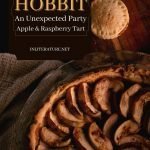 The ancient fruit, the apple, can be traced back to prehistoric times and is mentioned in some of our oldest literature. So it’s no surprise to find this versatile fruit served up in a dish at the table in a cosy Hobbit hole in Hobbiton.

What apple should I use?

If you’re lucky to live in the UK, you can buy the heritage variety that J.R.R. Tolkein would have been most familiar- the Bramley’s Seedling. While they are sold in all main grocery stores in the UK, very large and green with hints of red, I’d suggest you make sure you’re buying from a local producer. One orchard I came across in my readings, Starkey Bramley, can proudly say their family played a key role in helping save the Bramley apple in the 1990s from a fungus that began attacking the trees.

Without local producers continuing to grow heirloom varieties, these varieties can become quickly lost. The Costard apple is one example. One of the prominent cooking apples in medieval England, it’s reported to have become extinct in the 18th century.**

Making the apple tart in advance

In the Unexpected Party, along with a number of other requests by the dwarves, Bofur requests both mince pies and cheese. It’s possible he’s requesting the cheese as a stand-alone snack with bread, but I wanted to note that it was common in England to serve cheese alongside your apple pie or tart. The type of cheese varies depending on the source. I’ve seen aged cheddar as well as Derby and Wensleydale cheese as suggestions. If you have only tried apple pie/tart with cream or ice cream, I suggest you give this English alternative a try.
I’ve also since updated this recipe since I first published in 2013. I’ve now added in the additional step of cooking the apples whole to reduce their moisture, and therefore the liquid that ends up in the pie. In saying that, I’ve loved pouring out the excess raspberry and apple syrup that pools at the bottom of the pie and pouring it into a mug before topping with boiling water.

Any leftover can be stored in the fridge for a week or two, ready to be smothered on toast, dolloped over ice cream and dunked in your mouth by the spoonful.

Boiling the apples whole before cooking reduces their excess moisture. Without this step, the bottom of your tart will be very liquidy and cause your pastry to be soggy.